From tonight’s debate on law to stop no-deal Brexit.
Two kinds of Tory.

First Jacob Rees-Mogg on the job having a (U)kip 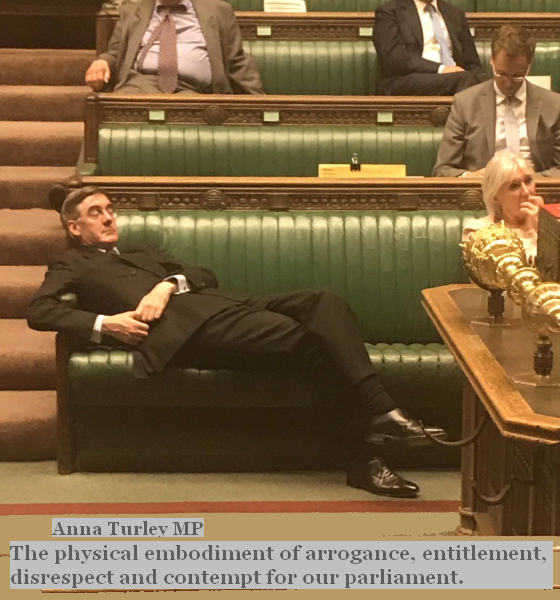 One MP offered Rees-Mogg a cushion for his head. JRM politely declined.

Second – In the Commons Nick Boles, the former Tory who now sits as an independent, is speaking. He recalls the day he woke up in hospital in 2017, where he was being treated for cancer, and got ready to go to the Commons to vote for article 50 to be triggered. His blood cell count was low, and there was a high chance of infection, he says. But he was driven to the Commons to vote because he believed the referendum vote should be respected.
He says he has voted for a Brexit deal. But what he will not do is accept a no-deal Brexit.
He says taking this stand lost him the support of his local Tory association, and led to him leaving the party. But he has no regrets. He has put what is right for the country ahead of his self-interest. How many members of the cabinet can say the same?
He says he is the only MP in parliament sitting as an independent progressive conservative. But he urges other MPs to join him simrixo that they can provide a new force in parliament.

Voting now – At least 20 Tory MPs have rebelled sacrificing personal careers (for the moment) to do whats right.
One said that Rees-Mogg was a great recruiting agent for Rebel.
(But some of the 20 may go to LibDems making that party much more powerful. New balance of power LibDem vs Labour + SNP + Plaid.)

10.06 “Boris Johnson on the front bench with a folder, so presumably responding as soon as government defeat announced”
Oh SQUEAK

MPs have backed the motion to allow a debate on a bill tomorrow that would prevent a no-deal Brexit on 31 October by 328 votes to 301 – a majority of 27.

This vote was to enable a Bill tomorrow to disable no-deal. Johnson says snooks he will ignore the Bill if passed tomorrow and call a Gen Election.
Corbyn & Jo Swinson (LibDEm) both say they will not allow Gen Election without this Bill, and Johnson cannot get the 2/3 majority required to call GE without them.
The bill will pass tomorrow, incl. fast track Lords, and the PM is instructed by it/ by Parliament to ask EU for extension so there is no no-deal.
OPTION 1. Johnson obeys the law – kicking and squealing. Nodeal avoided for a while, but Johnson immediately unable to govern with no majority. Gen Election.
OPTION 2. Johnson ignores the law as he threatened to do. Unprecedented to have PM in contempt of Parliament.
The Queen has the reserve option to invite parties to offer a government. The Tories would be unable to to do so. Tory party is dead. Johnson gets name in history books.
Next stage – Libdem and Labour have to work together in some form – Libdem =Remain.

Final count was 21 Tory Rebels, and they will not be reinstated whatever happens (insofar as we can trust anything this Govt says)

Someone clever has edited Rees-Mogg’s entitlement pose to reflect Tory loss of power. 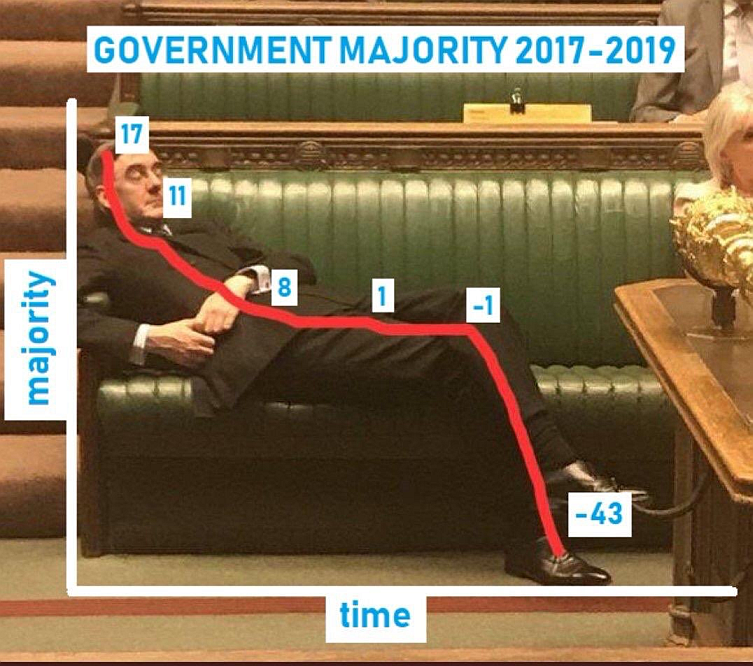 QUOTES
Nicholas Soames (Tory Loyalist) on Bojo & Cabinet “whose serial disloyalty has been such an inspiration to so many of us.”
Corbyn on Johnson: “No mandate, no morals and as from today no majority”