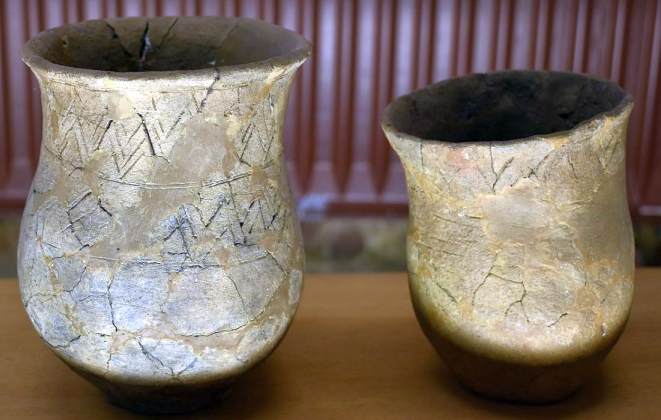 Fascinating new dating tech in archaeology will be revolutionary. Pottery has always been like a backbone to the timelines of ancient history. It turns up prolifically in broken pieces thrown away on dumps. Now it is poised to redo ancient dating and might open up the mysterious Beaker People.

Pottery was first used for dating by reconstructing pieces and comparing styles. A common style in different areas suggested a common culture. Slight changes of style could be used to identify earlier or later periods. A whole ‘encyclopaedia’ of pottery styles developed. Pottery sometimes gave a name to a whole people such as the pre-Celtic ‘Beaker’ people of Europe.
But none of the existing methods were very accurate and often patchy. The painstaking pottery database was flexible due to trading and pottery could last generations.
Carbon 14 measures the rate that Carbon 14 decays in organic matter so there has to be bone deposits or vegetable reliably associated with humans; even then the range is wide+_ plus minus 200 years, a big range, plus the chemical does strange blips at some periods.
Dendrocarbon dating relies on tree rings showing in a tree trunk cut flat across showing years of rich and weak growth, but needs long lived tree trunks in good condition.
Dating generally uses a combination of all three which works quite well but still leaves large date ranges especially going further back in time.

Prof. Richard Evershed, Chemistry, Univ. Bristol’s team has produced a method to date tiny food deposits left on pottery, even when soaked into the ceramic. It works with fats, milk, butter, cheese, meat, all common human foods. Accuracy is within a human lifetime and tested well over 8,000 years.
This will be revolutionary both because it is so precise, and because there is already a huge ‘library’ of pottery sherds around the world in museums, or easily dug up at new sites. Revisions on existing dates will now appear and upset existing theories of culture change, migration, artistic styles.

The Beaker people of Europe probably had a love of mead, going by the sediment in their beautifully decorated beakers. Shame we know little else about them.
Mead might also enlighten the appearance of the many bee priestesses of Crete, who are seen with bees and bee shaped skirts. They have been linked to ‘queen bee’ symbolism, female centred culture, or else perhaps honey used in the baths found in palaces, to embalm the dead. A more cheerful idea is bee priestesses, Melissae, enjoying an uproarious cult of alcoholic and deeply sweetened ecstasy.
Mead was also a great favourite of the Celts, attested as enjoyed by rampaging warriors in their feasting which bonded them to each other and their lord before going to battle, cf. Y Gododdin 9thC.